Cinemanic Monday: "There was nothing, only sugary sweet death" This post wouldn't be the same without the Jawbreaker theme song.
"Yoo-Hoo" by Imperial Teen
Yay for Jawbreaker! This movie is delicious and would not have been been the same without Rose McGowan. She was one scary bitch. If I went to school with her, I'd have been scared shit-less but secretly hoping to be her next makeover victim. Let's face it, Courtney definitely had the best clothes of the bunch. Vickie Brinkford (Vikki Brikkord) gets some major points for costume design. According to her IMDB page she also did Clueless and Romy and Michele's High School Reunion. That woman is an official bad ass in my book. I can only describe the clothes in this film as Retro Kink. I remember back in high school, there was this "create a commercial" challenge in my creative writing class and my friends Dallas and Amber and I totally ignored the "commercial" part of it and used it as an excuse create a movie trailer, "Gummy Bears". Yes, we shamelessly recreated our favorite school-friendly scenes and replaced the jawbreaker with gummy bears. We even got to borrow Amber's grandpa's sick convertible. We pop open the trunk, "Ew, what's that little red thing hanging out of her mouth?!" "You gagged her with GUMMY BEARS?!" "I didn't mean to use the whole bag!" LOL! OMG we took it way too seriously. I wish I still had that VHS. Someone in my house used it to record an episode of Seinfeld. I was so pissed! "Suck it and see or get the hell out" "Don’t think we’re anorexic, we’re not. That’s for the Karen Carpenter table. We’re not stupid. We eat. And we eat well. We just don’t eat in public. We don’t want people judging us by what we eat. It gives them ammo. The only ones with ammo are us. Food’s cool. You need it to live. But the mere act of eating invokes thoughts of digestion, flatulation, defecation, even, shall we say, complexion defection. I’d never eat a greasy pizza. Not even in front of the ultra-special students – the deaf, dumb and the blind – because at some terrifying level they’re associating that greasy pizza with your shiny face. A zit, a blackhead, a cluster of pores. It’s just another vexing stress." - Courtney 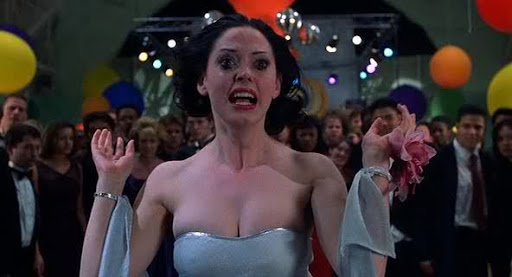 I had to include this awesome video featuring jawbreaker pottery making.
Posted by Mandy at 3:09 PM