I'm going to my first Radiohead concert tonight and I couldn't be more excited. I'm counting down the hours. My uncle was kind enough to give me a ticket for Christmas! The tickets sold out in about 10 minutes and he was able to get a pair. Then, a couple hours later, he won two more tickets off the radio! I'll be there with a few aunts and uncles. Lots of RH fans in this family. 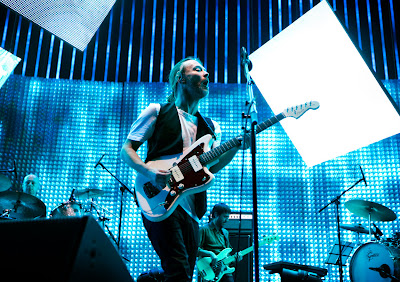 Update:
This had to be one of the best concerts I have ever been to. It was at the Frank Erwin Center in Austin, TX. The band sounded amazing and Thom Yorke blew me away. He was so full of life and was dancing around the stage. It was absolutely adorable! I only wished I had general admission so I could dance along with him. They played 23 songs total, including two encores. So many great songs. National Anthem, Kid A, the Daily Mail, Nude, Idioteque, Everything In It's Right Place and my personal favorite, Reckoner. It was heavenly!
Posted by Mandy at 4:29 PM